There are questions that we should all take time to ponder and ask ourselves.  Three of these questions I would challenge you to think about are:

Many people believe what they believe because they grew up with the influence of their parents, family and friends who believed what they now have adopted as their belief system. Other things can strongly influence our beliefs such as teachers in school, professors in college, media such as radio, television, internet and video games. Have you ever stopped to really muse about what the influence of these has been in your life?

People often think “I am my own person, the above mentioned things have no real influence on me.” The problem with this line of thought is when approaching life from this perspective we will not challenge the validity and truth of a belief or position but we can begin to accept it as fact simply because we encounter a belief system over and over –being bombarded with this from multiple sources.

What do I believe about the origin of man? Moral absolutes? The validity of marriage? The concept of covenant and commitment? Who is God? Was Jesus Christ God? Does sin exist? Is there a heaven and a hell? Does Satan (the devil) exist? Will I exist after I die? Can I know for sure what will happen to me when I die?

Many people want you to believe what they believe about these questions, but what authority are they basing their beliefs upon? When I was in college I was confronted with challenges to what I believed by my professors. My Biology professor, when I asked him about creation stated, “A belief in creation is for fools and old women but not for real intellects.” I had an English professor who encouraged her class to all subscribe to Playboy because the best authors wrote for Playboy. Another psychology professor stated all people are born good and it is the influences around us that causes us to do wicked things, so we cannot be held accountable for our actions. I then went to a Christian group who had advisors from another school helping with a conference being held at our college. When talking with one of the visiting advisors, she was telling me how she was currently living with her boyfriend and  what a wonderful relationship they were having. Later, my class advisor had me go with him to churches to hold seminars where I was a small group facilitator given a number of questions to ask a small group of people, being instructed to make sure all views were heard within the group, none was right or wrong, and at the end of each session we as a group were to come up with a consensus answers to the questions. I had been introduced to value engineering, situational ethics based on Hegelian dialectics, not knowing what any of those terms were or meant.  Everything I was exposed to in the previous examples flies in the face of what the Bible says on these issues.  Who and what was I to believe?

When confronted with this dilemma, one needs to examine the foundation of the belief system being promoted and what it is based on in order to discover what is true. Everything I confronted in the previous paragraph stood in direct opposition to what the Bible says. 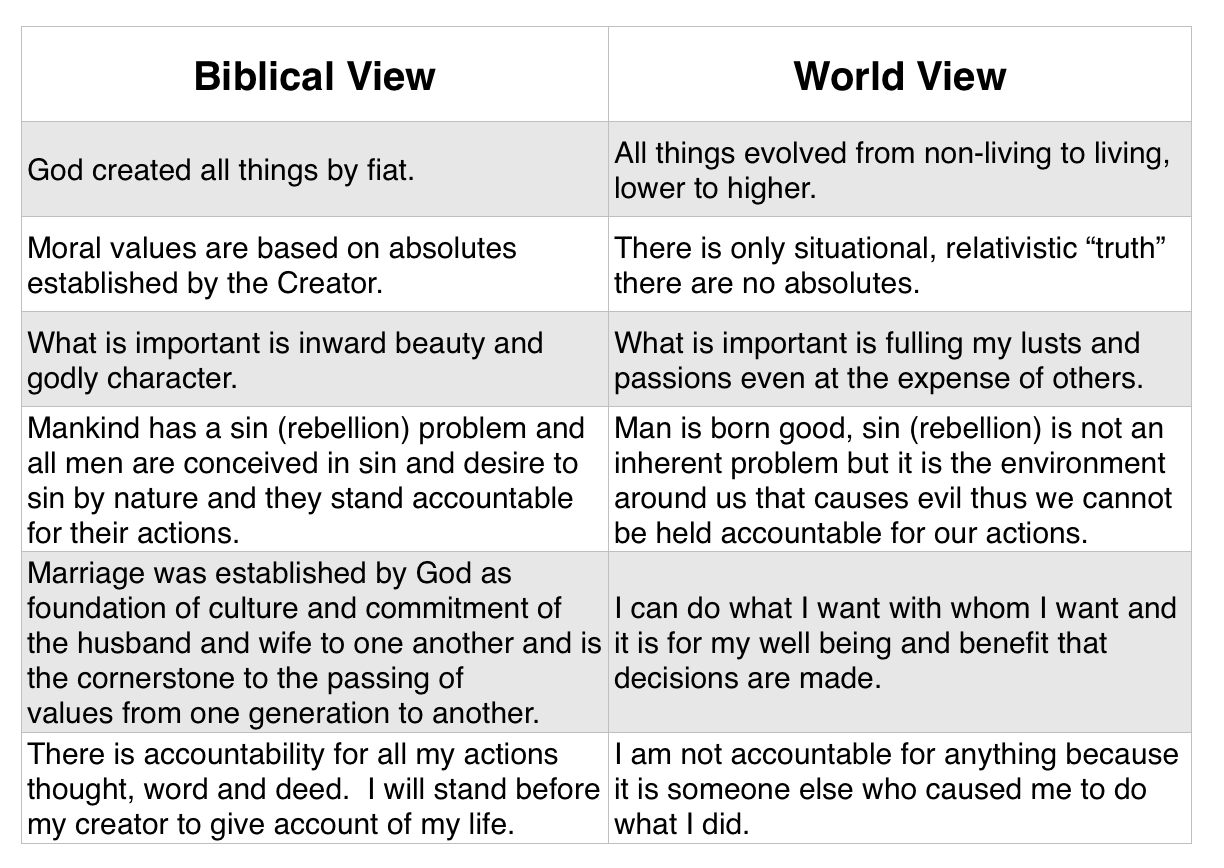 Sadly today many people in our nations do not know why they believe what they believe and have taken no time to examine what is the foundation of their beliefs. In a recent poll done by George Barna examining the world view of people in the United Sates discovered some disturbing trends that have occurred from the 1950’s until this poll was taken in 2009.

Mr. Barna States the following: ”There are a several troubling patterns to take notice. First, although most Americans consider themselves to be Christian and say they know the content of the Bible, less than one out of ten Americans demonstrate such knowledge through their actions. Second, the generational pattern suggests that parents are not focused on guiding their children to have a biblical worldview. One of the challenges for parents, though, is that you cannot give what you do not have, and most parents do not possess such a perspective on life. That raises a third challenge, which relates to the job that Christian churches, schools and parachurch ministries are doing in Christian education. Finally, even though a central element of being a Christian is to embrace basic biblical principles and incorporate them into one’s worldview, there has been no change in the percentage of adults or even born again adults in the past 13 years regarding the possession of a biblical worldview.”